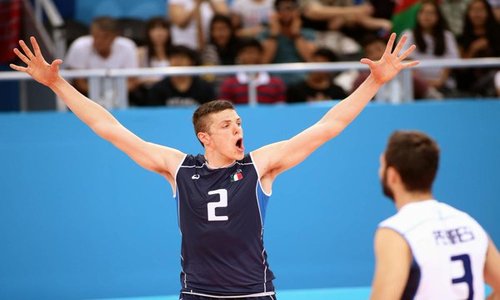 A tall youngster’s name was most often mentioned during the Playoffs 6 of the 2016 DenizBank Champions League. Diatec Trentino’s opposite attracted more attention than superstars like Wilfredo Leon, Osmany Juantorena, and Dmitriy Muserskiy – not a bad achievement for a 22-year-old.

Life could’ve turned otherwise for Gabriele Nelli had he fulfilled his first role on the volleyball court. The 208cm-tall opposite actually started as a setter. During a match of the Italian Serie B2 league Danilo De Santis, starting opposite and also Nelli’s teammate in the junior national team, got injured and his head coach back then decided to try the slim youngster as a replacement. The adventure took an even more inspiring turn as just two months later Gabriele was called up to the junior national team for the European Championship in Poland and Denmark. Although mostly on the bench in that tournament, Nelli came back home with a gold medal as squadra azzurra beat Spain 3-1 in the final in Gdynia. This is more or less how the journey of Trentino’s number one attacker in the playoffs against the Russian armada Belogorie Belgorod began.

In 2009 Gabriele joined the youth formations of Trentino Volley, a young Italian club that did some serious work over the years to consolidate the inflow of fresh blood into the team’s structure. Under the guidance of Radostin Stoychev, the first team experienced glorious days both on Italian and on international stage. Nelli grew up in proximity to that momentum and patiently waited till 2013 when he was part of the senior squad. It was, however, Roberto Serniotti, Stoychev’s assistant and replacement for a year, who, influenced also by the club’s reduced budget, invited Nelli to the first team. In season 2013-2014 Gabriele was even a third-choice opposite after Tsvetan Sokolov and David Szabo. A year later Nelli and Energy T.I. Diatec Trentino won the title in the Italian league at the expense of star-studded Parmareggio Modena.

The opposite started most of Trentino’s matches in 2015-2016 season on the bench while he watched Mitar Djuric, the Greek converted first-option opposite, lead the team through the Champions League. And again it was an injury that gave a push to Nelli’s career. Djuric was unavailable in the middle of the season and the time finally came for Nelli to step up and carry Trentino’s offensive prowess on his shoulders. He finished as Trentino’s top scorer (17 points, 63% attack efficiency) in the first-leg away win in Maaseik against Volley Asse-Lennik. The Italians hadn’t been considered favourites prior to the clash with Belogorie in the Playoffs 6, but a highly inspired 3-0 first-let win at home saw their fortunes changed. Nelli sealed that score with an ace, one of his six overall in that match.

Chances are that Radostin Stoychev will bet on experience and will play with Mitar Djuric in the Final Four in Krakow in two weeks. But one thing is sure – patience has been key for Gabriele Nelli who walked a long way from the lower Italian divisions to turning into one of Italy’s hot youngsters. The opposite, who also helped his country to win the bronze medals at the 2015 U23 World Championship in the United Arab Emirates, plays a fast ball in attack and has already evolved into a lethal server. His attack technique doesn’t look very clean at first, but at such height and speed Nelli does his job just fine. And who knows, Diego Mosna, Trentino Volley’s president, might soon not need to spend his money on buying another expensive foreign opposite because the club has invested in its future.