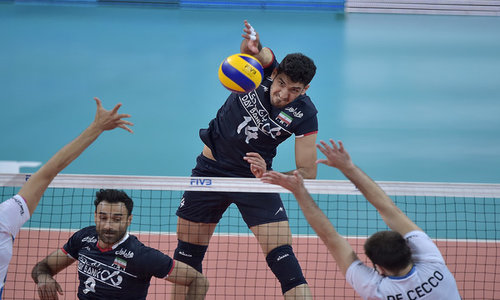 “With a name as long as his potential” – this is how FIVB first introduced the Iranian teenager in 2013 during the Boys’ U19 World Championship. Three years later the outside attacker is part of the senior team and has been one of the revelations in 2016 so far.

Manavinezhad’s path across Iran’s junior and youth formations have been a great success. The Persians dominated in a series of Asian championships and Paykan’s outside attacker often starred in those. The player helped his country win the 2012 Asian Youth Championship, then the 2014 Asian Junior Championship, followed by gold at the 2015 continental U23 tournament. In 2014 Mohammadjavad was even selected as the event’s MVP. He left his first serious impressions in a worldwide competition outside Asia during the 2013 U19 World Championship in Mexico when he was Iran’s captain. There he put up his full arsenal on view and often carried Iran’s attack force. Manavinezhad and his teammates missed the medals by a whisker, finishing fourth, but what the outside attacker gained was attention.

“Volleyball came to me as something very natural because I grew up watching my father play and I have been around this sport all my life,” he says.

Both the former and the current national team head coaches, Slobodan Kovac and Raul Lozano respectively, trusted the youngster and called him in the first team. Manavinezhad made his senior team debut at last year’s World League match against USA in Los Angeles. But it wasn’t until this year’s edition when the outside attacker appeared more on court and released his potential. The 20-year-old was Iran’s top scorers in two of the team’s four wins during the 2016 campaign. He contributed 18 points for the win against Argentina in Rio de Janeiro and then another 21 against Bulgaria in Belgrade.

Apart from a bright future, there is a number of volleyball aspects that outline Manavinezhad. He is tall (200 cm) in comparison to most outside attackers in the Iranian national team. Mohammadjavad is explosive, has great attack technique and is difficult to play against. He attacks impressively from 6 as well, helps the middle blockers a lot at the net and can serve greatly. Overall he is a very skillful offensive outside attacker and has proven his value in Lozano’s team. Where he still struggles a lot is on the reception line – not a surprise for someone with his characteristics.

Quite unexpected and a bit disappointing was Raul Lozano’s decision to leave the youngster outside the final Olympics roster. Searching for more experience, the Argentinian head coach relied on known fighters and deprived Manavinezhad of the chance to play for his country at the Olympics. Which gives you some more time to learn and remember his long name as he is someone that will shine for the Iranian team in the years to come.