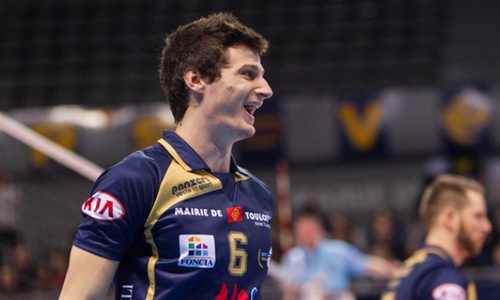 The youngest member of the French national team for the European qualifiers in Berlin is a very well-known name in his country. Thibault Rossard was the revelation of the 2013-2014 domestic season, back then with Toulouse, and is one of the most versatile players in France.

The left-hander successfully performs as an outside hitter and as an opposite, when necessary. His club Arago de Sete finished 2015 as a leader in the standings and Thibault had a major contribution for their great run. He ended up being the team’s best scorer quite often, outnumbering even the league’s top attacker and his teammate Marien Moreau. Although Thibault Rossard, 194 cm, does not tower high above most volleyball players, his efficient technique and left hand make him very useful both from positions 2 and 4. Typical for the French school, the 22-year-old is a wonderful receiver as well. At the 2011 CEV U19 European Championship he was selected the best receiver and won the silver medals with France which lost the final match in Turkey against Serbia in five sets.

He made his first steps in senior volleyball with Spacer’s Toulouse and two years ago he stood out among other talents in Ligue A. But you should watch out when you see a Rossard play. Thibault comes from a volleyball family and is one of the three family members who are professional players nowadays. His brother Quentin is a setter, whereas their cousin Nicolas is a national team player, teammate of Thibault at Arago de Sete, and one of France’s best liberos.

Whether Thibault will get the chance to play for his country at the qualifiers in Berlin and then at the Olympic Games in Rio, we will know this week. One thing is clear, however – he is among those to take on the French legacy in the next Olympic cycle and he could aid his national side to become one of the favourites at the games.