Volleyball Is My Passion 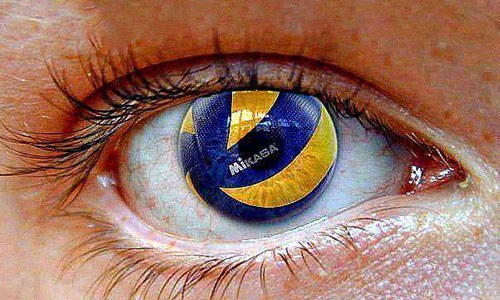 Volleyball has been always my passion. Once I touched the ball I couldn’t stop. I didn’t care about the time or the energy. I just wanted to play. That was my only wish.

As a kid my dream was to become pro tennis player. I spent thousands of hours on the tennis court. Even if I had no coach, I was constantly practicing outside, even during the winter when the weather is anything but not hot. I’ve been doing this because my goal was to play like Pete Sampras. Unfortunately (or not? ), I grew up tall :-).

With a height of 200cm tennis was not an option anymore. So, I had to leave behind this sport. However, I’ve learnt a lot from it and I think it helped me a lot later in my volleyball career. Afterall, they say – Every experience in life is worth it…

I had to give up on tennis, but it didn’t mean my sports spirit would just flew away. Sports had been a part of my life and maybe it was  “written in the stars” that I had to continue on with it in my life.

But what was the right kind of a sport for me? What could I choose? Or maybe the sport itsef would choose me?

I’ve often read that “Best things happen unexpectidly”. So, this was my case and the miracle appeared to me as an opportunity in a random conversation with a friend of mine who told me:  “Hey, you are tall, why don’t you come to our volleyball practice? “.

Yes, I went. And I’d be forever thankful that I’ve listened to my inner voice.

However, the beginning was hard! The ball didn’t listened to me, every woman and man was playing better than me. And how do you think I reacted? I was almost all the time angry. “Why it all has to be so tough?”, this was a question that was spinning around my head every single day…

After some time, and by “some time” I mean quite a long time, I felt that something is going on. Something was happening in my life and I clearly could notice the change. Volleyball was getting under my skin as my volleyball skills were improving. The more I played, the more I wanted. One hour morning run, followed by two hours in the fitness, short rest, 3 hours on court in afternoon, Monday to Friday, weekend on tournament – no problem for me. I believed in hard work (and I still do believe in this concept 🙂

In the end, the hard work brought its results.

I almost had accomplished my dream to play with Czech men’s national team at Olympics, even if we didn’t qualified. Taking part for 3 times in World Championships was  a real satisfaction for me. The experiences and feelings to be on court in front of several thousands of spectators, to win, to lose – all this was just unbelievable and I am really grateful for it.

Volleyball gave me so much! Now it is time for me to give back, to help volleyball.

Volleyball is my true passion and I will do anything for the best sport in the world.