Top Volleyball Players of All Time 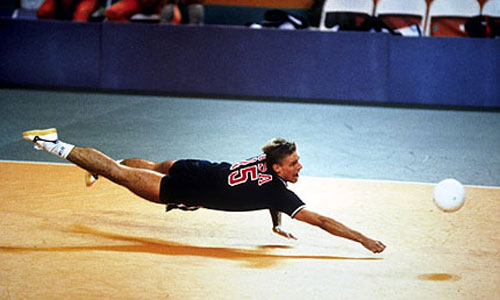 “Karch” Kiraly
Charles Kiraly is the only player to have won Olympic gold medals in both the indoor and beach versions of the sport. Kiraly played for the UCLA Bruins volleyball team from 1979 to 1982, winning the award for Most Outstanding Player in 1981 and 1982. He led UCLA to three NCAA Men`s Volleyball Championships in 1979, 1981 and 1982, losing only 5 games in 4 seasons. Popularly nicknamed the “Volleyball Thunderball,” Kiraly became a fixture of the US national team, winning Olympic gold medals in 1984 and as captain in 1988. He was voted the world`s leading player by the Fédération Internationale de Volleyball (FIVB) in 1986 and 1988.

Giba
Gilberto Amaury de Godoy Filho, generally known as Giba, is a current Brazilian player, with definite claims for inclusion amongst the all-time greats. Though not particularly tall at 192cm, Giba possesses astonishing speed and athletic ability, making him the best wing-spiker in the world. He has been a crucial member of the Brazil national team, the reigning World Champions who have dominated the sport in the 2000s, winning gold at the 2004 Olympics and silver in 2008. Giba was voted the Most Valuable Player in the 2004 Olympic Games, 2006 World League, 2006 World Championships, 2007 FIVB World Cup and 2007 Pan-American games.

Lang Ping
“Jenny” Lang Ping was picked for the Chinese national team towards the end of 1978. Playing as a chief spiker, she was nicknamed “Iron Hammer” for her powerful spikes characterised by high jumps, stylish arm movements, brisk and forceful downward punches, varied tactics and a high success rate. She steered the Chinese team to World Cup successes in 1981 and 1985, a World Championship title in 1982 and a win over the USA to take the gold medal at the 1984 Olympics.

Alejandrina Mireya Luis Hernández
Generally known as Mireya, this Cuban international was renowned for her spectacular jumping ability, despite being only 176cm tall. Part of the Cuban team successful in the 1983 and 1987 Pan-American Games, Mireya won the gold medal with Cuba at the 1992 Olympics, a title they successfully defended in 1996. She led the Cuban team to success in the inaugural FIVB World Grand Prix of 1993 and Word Championships in 1994 and 1998. She retired after a second Grand Prix and a third Olympic gold medal in 2000.

The World League is an annual men`s competition which has been in operation since 1990. Brazil and Italy have been the most successful nations, with 8 wins apiece. The 2009 event, played from 12th June to 26th July saw Brazil defeat Serbia 3-2 in the final, Brazil collecting their 8th gold medal and Serbia their 2nd consecutive silver medal. Russia beat Cuba 3-0 in the playoff for the bronze medal. Volleyball has become sufficiently popular to be included in the sportsbooks of most online bookmakers and can provide an interesting addition / alternative to a bet on League One football.