8 Important Advice How to Serve in Volleyball 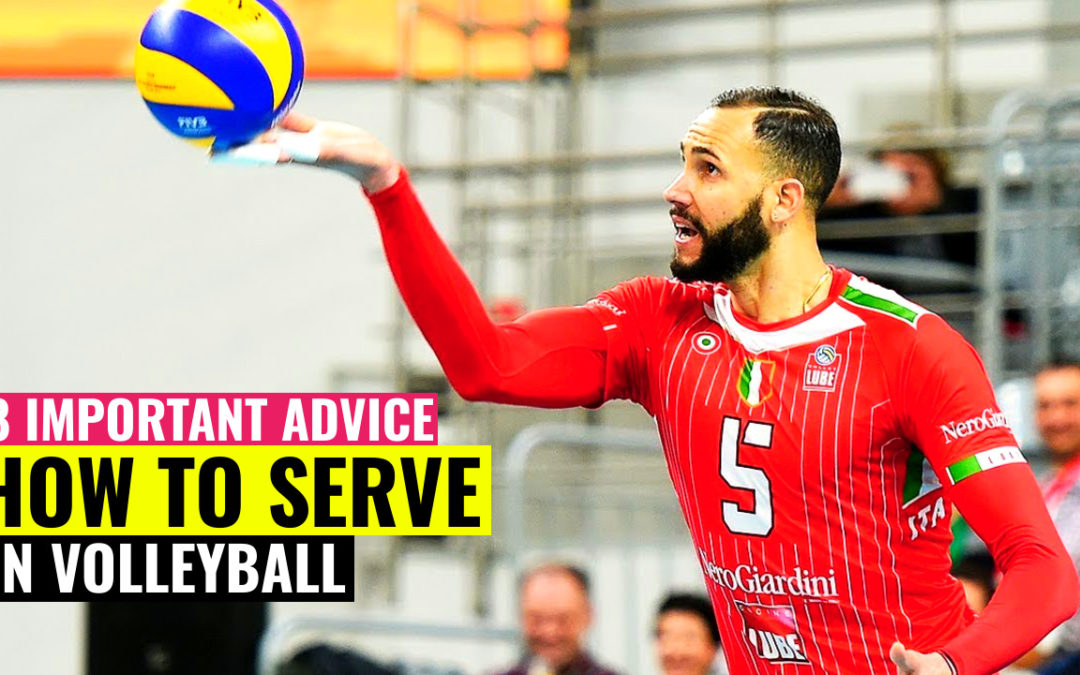 Serve is a big weapon in volleyball, but many of us have reserves on the serve. What should be the goal of the serve? What should we think about when serving? Where should we serve? What types of serves should we know? I’ll answer these and similar questions in this video.

The main goal of service

Every volleyball activity has a goal, and it couldn’t be more different on the serve. Sure, you may hear different goals from players or coaches. When we start volleyball, our goal is to put the serve over the net so that it lands the court on the other side.

You also hear from the young players that their goal is to make an ace, that they want to score a point from every serve. I understand their aspirations, but that means serving at maximum risk and that’s where a lot of the errors come from. You also can’t count on every serve being an ace. Even the biggest volleyball stars don’t play this way. If you make 3 or more aces in a match you will be happy and it means a good performance on serve. But if you make 9 errors on top of that, it’s not such a good indication of your serve.

So don’t think this way. The main goal of the serve is to create constant pressure on the opponent and above all to get them out of their system, out of their planned attacking strategy. To put the opponent in situations where they won’t receive well, where their receptions will end up outside the three-meter line. Then you can be pretty sure that they won’t be able to play quick sets to middle blockers, and even the sets to the outside hitters or the opposite will be higher.
Your defense at the net will have less work and more time to block sets to the outside hitters or the opposite, and even the defense in the field will have a better chance of defending the attacks.

Therefore, always keep in mind that your primary goal is not an ace, but an inaccurate reception by your opponent, ideally beyond the three-meter line. If you serve in such a way that each of your serves will be received further away from the net, you have accomplished your task and your team has a great chance of scoring many points after your serve.
If we look at, for example, the measurements of serving efficiency in women’s volleyball that the U.S. Volleyball Federation writes about after winning gold medals at the Olympics, and we want to know specific numbers, ideally.
We should push the opponent’s receptions away from the net 45% of the time from all our serves.
We want the opponent to be out of their offensive system 4 out of 9 balls they pass.
Jump float serve should be directed into the court 95% of the time, meaning we can make 1 error out of 20 serves
Jump serve should end up in the court 88% of the time, we should make 7 out of 8 serves.

Every player should have a routine on serve. Routine is important because if we always prepare for the serve in the same way, we will fix the same movements and mind set on the serve. Therefore, try to build or reinforce your own routine that you will perform on every serve. Routines also calm the nerves, you are alone when you serve, you are in full control, you can concentrate fully on the serve.

But you know, many things can affect you when you serve, your insecurities, coach pressure, match result, fatigue and other things can affect you. And it’s the routine including calming your mind, taking a few deep breaths, replaying your serve in your head ahead of time that will help you counter these influences.

Speaking of mind-set routines, we should also think positively about serving. We can’t go into a serve and say, I’m going to make an error anyway. I’m definitely not going to serve to the front outside hitter. Or we’re in the end of the game and I know myself, I don’t serve well in those situations.
That’s similar to on offense, receiving a serve or setting a high set. We can’t think negatively, we can’t say to ourselves that we’re going to make a mistake now. We would be deliberately undermining our confidence in ourselves.

We’re practicing our serve, trying to improve our serve. And that’s where our confidence should come from. So when you go to serve, think positively about it. Encourage yourself, now I’m gonna hit the serve exactly where I want it. I’m gonna serve a good serve. My serve is not going to be received by the outside hitter exactly to the net. Don’t think about anything else but the serve, just focus on it, how you’re going to throw the ball good, how you’re going to hit it high and it’s going to go over the net to the other side.

We get into a lot of situations in a match, sometimes we are leading, sometimes we are losing. But we should always think about the next point, the next serve. If I’m going for a zero-zero serve, I should think about it in the same way as I did for the fourteen-fourteen serve in the fifth set. I shouldn’t think, it’s the beginning of the match, now I can afford to make a mistake. Or, we’re up five points, I can take a risk now, it’s not going to affect our lead anyway. On the contrary, you have to treat every serve the same. Just like the routine. If I made a good serve and my team won a point, I should make the same serve again, put pressure on my opponent and expect a chance to win a point for my team.

This is especially important after a time out. The opponent’s coach usually takes a time-out when he wants to break our point series. He takes a time out to throw off the rhythm and routine of our serving player. And we shouldn’t help him by missing the serve after a time out. Because maybe this series can continue after the time out and can be decisive for the development of not only the set but also the match. So my advice is clear, think about every serve the same way, no matter what the situation is, and if your serve was effective, continue with the same type of serve.

All players who serve, apart from the libero, should also develop their serve. What do I mean? Imagine that you master a very good float serve from zone one to zone one. It’s your big weapon. But you may find that in your rotation, when you serve, there will always be a libero on the other side of the net receiving your serve in zone one. And liberos are usually the best receivers, so your quality serve will be going to be received well to the net during the match and the setter will be able to play quick sets to all the attackers. You won’t benefit from your quality serve, so it’s important to develop your serve and serve quality not just to one zone.

Serving to the spot

Speaking of developing your serve, this includes serving to a specific spot. I experienced this myself many times when we were serving in the national team, coaches often gave us tasks and targets where to serve. One time it was a chair in zone five that we had to shoot down with our strong jump serve. The second time it was a mat in zone one that we were supposed to land our serve on. Or maybe a blocker standing under the net in zone two where we were supposed to direct our short serves. That’s why it’s important to learn to serve to specific spots, zones. So that we can later apply our practiced serves in matches.

Since volleyball is a collective sport, you can never play an absolutely identical match, everything is always evolving and we have to adapt in almost every ball. Therefore, it is necessary not only to know what type of serve can help you, but also its execution. It’s nice to know exactly where I want to serve, but often under pressure in a match we fail to direct our serve to that spot. If we want to get the most out of our serve, we should learn to serve to specific spots.

Volleyball is every day evolving and the more complex we are as players, the better we can expect our team performance to be. And complexity on serve is another point I want to mention. Every player usually serves from a certain zone.

This makes our serve a bit predictable. My opponent can read my serve after a few serves, he will know that I have a good serve to zone one and will immediately reinforce this zone. That’s why I think we should be more skilled on our serve and be able to hit the serve in all zones when we serve from zone one, zone six and zone five. Because if we can learn to serve down the line from zone one to zone five and also be able to not only serve from zone five to zone one, we’ll be more complex servers.

And in turn, our complexity will be our advantage over other opponents and their reception. We will not be predictable, we will be able to use serves flying from more than one zone in different situations or in different matches. We’re just going to be more developed.

I purposely don’t talk about power and speed of serve in this video, which undoubtedly play a big role. But again, if we only serve a hard jump serve, our serve becomes predictable. The opponent on the other hand can put four players against my serve when the opposite will be helping to two outside hitters and a libero.

Therefore, even players who have a good jump serve should be able to serve a short jump serve. If you look at the outside hitters of the French men’s national team, for example, you will see that they all master this short serve. So don’t forget to practice it in your training sessions and use it in matches.

I believe these 8 tips on how to serve in volleyball, how to think about serving, will help you become a better player.